For people and Rotary folk who’d like to stay longer in Prague.

All Rotary project alumni meet together.

Not only a Conference

In the week of 11th to 19th May, we will have the annual District Conference in Prague of Czech and Slovak Rotary Clubs belonging to District 2240, but also lots of other activities connected to Rotary in our District and in our two countries. This international meeting of members, friends and supporters of Rotary is being held in 2019 when we are remembering the 30th anniversary of the return of Rotary to our countries in 1990 after the fall of „the Wall” and „Iron Curtain” and the 20th anniversary of own Czecho-Slovak District, established in 1999. At the same time, we want to focus on the expected successful conclusion of the lengthy world wide project to eradicate polio from this earth where Rotary has been working with WHO, Unicef and the Bill & Melinda Gates Foundation. Our Conference Organisaton Team is preparing an environment conducive to great discussions and working together, as well as an atmosphere for informal friendly meetings. 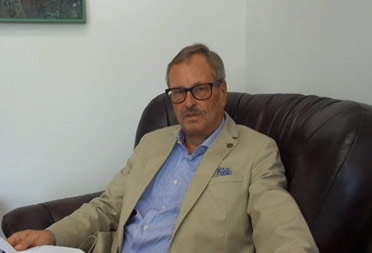 Our invitation to the May WEEK OF ROTARY IN PRAGUE culminating in our District Conference, has been accepted, amongst others, by Thomas Watzenböck, bearer of the Rotary International SERVICE ABOVE SELF AWARD. 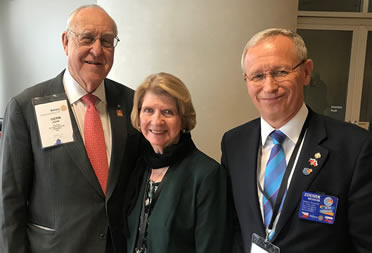 KEEP UP THE GOOD THING!

This is a message to all who take part in the preparation of the conference from John Germ, who will represent RI President Barry Rassin at the conference. 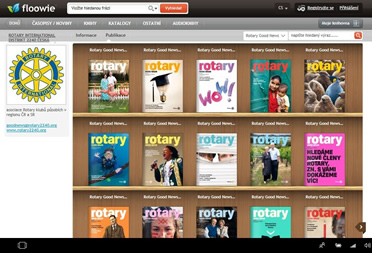 DOWN THE MEMORY LANE

Do you want to recall the things we did in the Rotary 17, 12 or nine years ago? Fancy the history of our District and its clubs? Do you miss any issues of our magazine, ROTARY GOOD NEWS?

Over 60 years ago, the world helped Czechoslovakia, will you now help the world?

Czechoslovakia was the first country in the world, in 1960, which, with the support from overseas, eradicated a children’s paralytic disease – poliomyelitis – shortened to Polio. It happened because of a thorough preventitive programme of vaccinating all new born babies. This method, used in Czechoslovakia, was adopted by the World Health Organisation (WHO) later in other countries. One of the leading figures of this whole project for eradicating Polio, right from the beginning, was a Rotarian, later a District Governor of District 2240 for both Czech and Slovak Republics, an immunologist, MUDr. Viktor Príkazský.
The great effort of Rotarians, who from 1988, every year, contribute money, time and skills, as well as personally vaccinating in the field, can hopefully be crowned with the success of completing such immunisation in as yet undiscovered places in the world. Last year, there were only a few cases reported in Afghanistan, Pakistan and Nigeria. The immunisation events around the world have created new health processes, which have served as vehicles for delivering other necessary care to local populations.
The Rotarians and their Rotary Clubs in the Czech Slovak District 2240 have been involved in this global effort since 1999. We have helped to eradicate polio since then with our donations of circa 4 million Czech crowns.
It is through these joint efforts by Rotary International, The Bill & Melinda Gates Foundation, and other world health organisations, that the day is fast approaching when polio will be eradicated from this earth.
We are now very close. Take the last small steps with us! Join us?
The new project END POLIO NOW gives each of us this opportunity.

You can pay for a project END POLIO NOW to the account here.